Useful InfoThailand at a Glance

Location: Thailand is situated in the heart of the Southeast Asian mainland, covering an area of 513,115 sq.km. and extends about 1,620 kilometres from north to south and 775 kilometres from east to west. Thailand borders the Lao People’s Democratic Republic and the Union of Myanmar to the North, the Kingdom of Cambodia and the Gulf of Thailand to the East, the Union of Myanmar and the Indian Ocean to the West, and Malaysia to the south.

There are conflicting opinions as to the origins of the Thais. Three decades ago it could be said with presumed certainty that the Thais originated in Northwestern Szechuan in China about 4,500 years ago and later migrated down to their present homeland. However, this theory has been altered by the discovery of remarkable prehistoric artifacts in the village of Ban Chiang in the Nong Han District of UdonThani Province in the Northeast. These include evidence of bronze metallurgy going back 3,500 years, as well as other indications of a far more sophisticated culture than any previously suspected by archaeologists. It now appears that the a Thais might have originated here in Thailand and later scattered to various parts of Asia, including some parts of China. Siam is the name by which the country was known to the world until 1939 and again between 1945 and 1949. On May 11, 1949, an official proclamation changed the name of the country to “Prathet Thai”, or “Thailand”, by which it has since been known. The word “Thai” means “free”, and therefore “Thailand” means “Land of the Free.”

Climate: Thailand is a warm and rather humid tropical country with monsoonal climate. Temperatures are highest in March and April with average temperature of 28 degree Celsius to 38 degrees Celsius and humidity averaging between 82.8 percent to 73 percent

The population in Thailand is approximately 67 million, of which around 8 million live in the capital city, Bangkok.

The national and official language is Thai while English is widely spoken and understood in major cities, particularly in Bangkok and in business circles.

Government and business offices are open from 8:30 to 16:30 hours, Monday to Friday.

Thin cotton is the best. Jackets or sweater may be necessary in a cool season, especially in the mountainous areas on the North or Northeast.

220 volts 50 cycles throughout the country 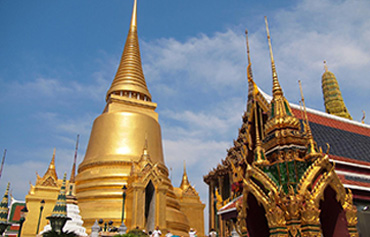 The major attraction of the Outer Court is the, the residence of Thailand’s most sacred Buddhist sculpture: Phra Kaeo Morakot (the Emerald Buddha), which was carved from flawless green jade, situated amid gold-gilded sculptures and ornaments, and fresco paintings of the main ordination hall. 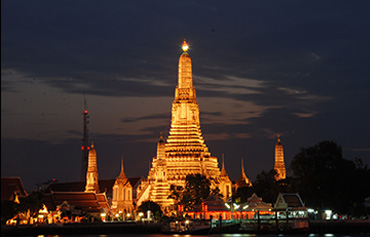 The statuesque pagoda of Wat Arun, or The Temple of Dawn, on the bank of Chao Phraya has always been the most remembered scene of Bangkok’s skyline for ages. It is believed that Wat Arun was built during Ayutthaya era and is better known from its other name: Wat Chaeng, which means the Temple of Dawn.

The main highlight of Wat Arun is undoubtedly the grand pagoda, or prang in Thai. Influenced by Khmer-style pagoda, the 67-meter-tall pagoda is made of cement covered by million pieces of China porcelains. It is surrounded by four smaller pagodas. 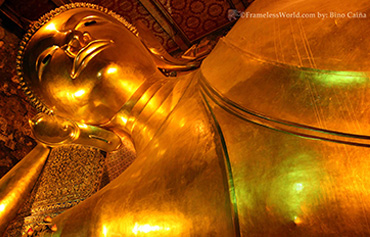 Wat Phra Chetuphon Wimonmangkalaram or Wat Pho, as it's commonly known, was built in the 16th century and regarded as the royal temple of the reign of King Rama I, is famous for two things: (1) the 46-meter-long Reclining Buddha built in 1832 featuring the feet beautifully inlaid with mother-of-pearls and (2) the Thai massage. 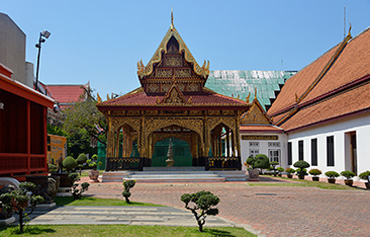 The National Museum houses a vast collection of artifacts and antiques founded throughout Thailand, divided into periods of time: from pre-historic eras to old kingdoms and the current Rattanakosin era.

The Queen Sirikit Museum of Textiles 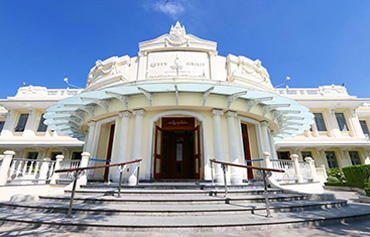 The SUPPORT Foundation under the Royal Patronage of Queen Sirikit has renovated the European-classic Ratsadakorn Bhibhathana building to showcases exhibitions telling the story of how Her Majesty Queen Sirikit has helped turn Thai silk from local handicraft into a symbol of Thailand, through her SUPPORT Foundation. Highlights are HM Queen Sirikit’s personal collection of dresses designed and tailored from Thai textiles by international and local designers. 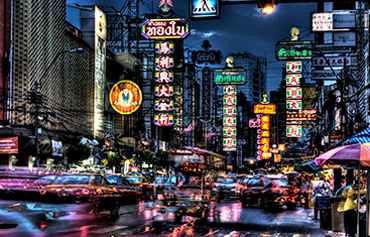 Thailand’s largest Chinese community or commonly known among Thais as Yaowarat. Yaowarat is widely known as the kingdom’s largest center of gold trade and a great foodie destination.

During the day, you will find shops selling gold, Chinese herbs, fruits and Chinese restaurants serving authentic cuisine on both sides of the roads. But after sunset, the road turns into a street food heaven where a number of food trucks prepare you marvelous food, from Chinese fried noodles to iced Chinese dessert. 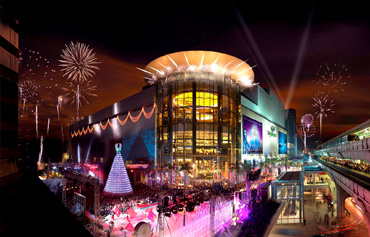 It all starts at Siam Square, a low-rise complex of shop houses, home to hip boutiques of young Thai designers and teenage activities. Across the street are three sister shopping malls: Siam Discovery, Siam Center and Siam Paragon.

At Ratchaprasong intersection is Central World, Southeast Asia’s largest lifestyle complex that houses two mall-in-mall: Zen and Isetan. Across the street are Gaysorn and Erawan, where you find the most luxurious fashion brands in the world. Walk further and you’ll reach Central Chidlom, the legendary upscale shopping mall to find selective luxury brands as well as top Thai designers.

Photo by Tourism Authority of Thailand 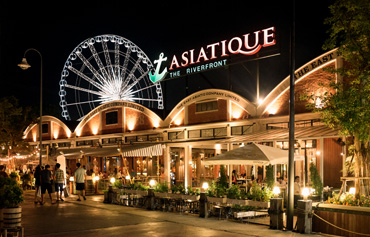 The largest waterfront themed retail and new lifestyle night shopping place in Bangkok, Thailand that combined the elements of the Thai history and the modern lifestyle in the fabulous way, under the concept of Festival Market and Living Museum. The total project area is over 12 Acres located adjacent to Chaopraya river with the longest boardwalk over 300 meters. 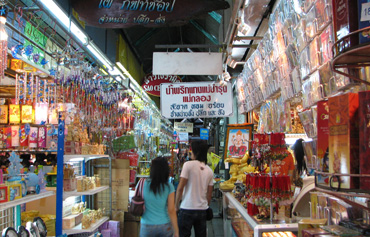 Fully open on Saturdays and Sundays only. Provides shoppers with a huge variety of merchandise it has to offer, from latest fashion items and vintage decor finds to Thai crafts and teak wood tables. Though the market officially opens at 7 am in the morning, shoppers usually go in the afternoon when the weather is not too hot and they will hang around till 7 or 8pm.

OTHER ATTRACTIONS OUTSIDE BANGKOK 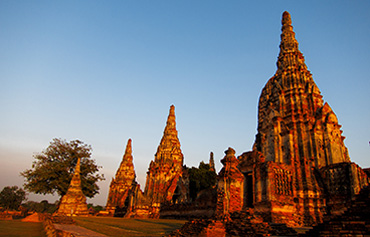 The ruins of Auutthaya that now remain, many of which have been painstakingly restored, have been granted World Heritage status by UNESCO. The architecture of Ayutthaya is a fascinating mix of Khmer and early Sukhothai styles. Some cactus-shaped obelisks, called prangs, denote Khmer influence and look something like the famous towers of Angkor Wat. The more pointed stupas are ascribed to the Sukhothai influence. Ayutthaya is only located about 90 kilometers from Bangkok and can be visited on a daytrip 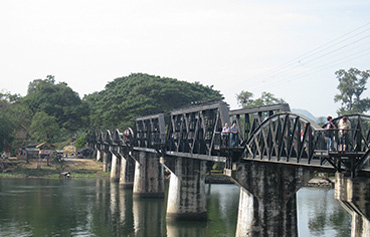 Because of its magnificent landscape and charming beauty, Kanchanaburi has become a major tourist destination, with attractions including several well-known waterfalls, caves that were once inhabited by Neolithic man, pristine national parks, tranquil rivers, virgin forests, and several large reservoirs. The city of Kanchanaburi is located at the point where the Khwae Noi and Khwae Yai Rivers meet and form the Maenam Mae Klong. The notorious Death Railway passed through the town, near which stands the site of the Bridge on the River Kwai. 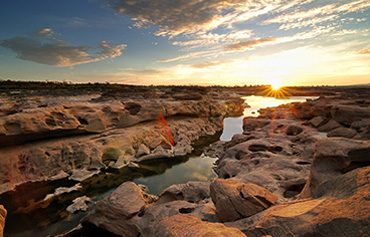 Located in the lower region of Northeastern Thailand, 629 kilometers from Bangkok, Ubon Ratchathani province features plateaus and mountain ranges with the Mun River running through the middle. Sandstone cliffs along the Mekong River serve as a natural border between Thailand and Laos. The region where Ubon Ratchathani borders both Cambodia and Laos has been coined “the Emerald Triangle” in recognition of its magnificent green landscapes. Adding to Ubon Ratchathani’s natural appeal, Phu Chong Nayoi and Pha Taem National Parks are two of Isan’s most unspoiled and unvisited natural preserves. 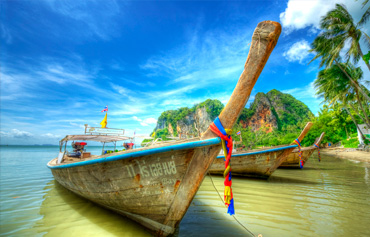 Krabi, which lies along the coast of the Andaman sea in Southern Thailand, is a top tourist destination as a result of its plentiful natural attractions including, white sandy beaches, crystal clear water, extensive coral reefs, numerous caves and waterfalls, and over 130 islands, including Koh Lanta and the jewels of the Andaman coast, the six islands of Mu Koh Phi Phi National Park. 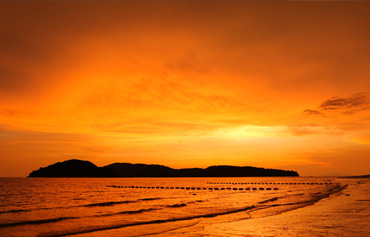 Thailand’s largest island is an international magnet for beach lovers and serious divers, who enthusiastically submerge themselves in the Andaman Sea. Blue lagoons and salmon sunsets make for a dream-like atmosphere, and indeed, a vacation here can feel a bit surreal.